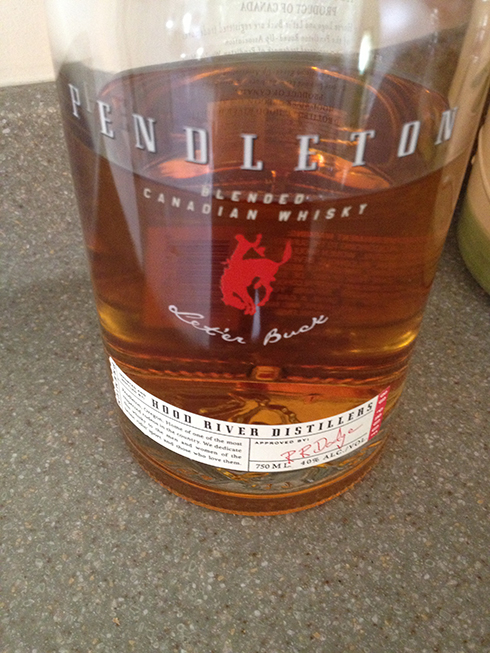 Every once in a while, you find a new brand of a type of alcohol you’ve learned to love all over. Of course, I am referring to whiskey. And specifically, canadian whiskey.

Crown Royal is the most well known brand of canadian whiskey and it’s also one of the best for a mainstream brand. But branching out, you find other blends and brands that you end up trying at a friend’s house and decide you like them. Pendleton Whisky is one of those.

It was a good year ago that I found this brand while visiting friends in Mesquite, NV. I asked if they had any Crown, but instead, the gentleman of the house brought out this great looking bottle of a lighter colored whisky.

Two glasses with a few ice cubes were prepared and he poured a couple of ounces in each one. On first sniff, this smelled good. Very woodsy. I took a sip and it went down smooth. Very heavy smokey flavor, obviously due to the process of aging in oak barrels [like many good whiskeys are]. No real burn, which I was expecting for a whiskey I hadn’t tasted before. After I let some of the ice melt into the whiskey, it held it’s flavor very well. I politely asked for another pour without adding more ice.

On our way out of town, I stopped by Lee’s Discount Liquor and picked up a fifth of Pendleton.

With the bottle being room temperature, I also served myself a 1.5 oz jigger of Pendleton neat in a smaller rocks glass. Again, smooth, but with more of an edge than when it’s served on the rocks. I’ve still not acquired a taste for scotch, which explains a bit of reluctance when having whiskey neat. I’ve not quite reached the point to enjoy this whiskey [or any whiskey for that matter] being served un-chilled or defiled with ice.

I’ve been known to mix my whiskey with a Coke or Sprite, so it was natural that I tried this. So once back home, I tried it with Sprite. The heavy oak and smokey flavor didn’t mix too well. It wasn’t bad, but the combination wasn’t meant to be. Next I added Coke to the 2 oz of Pendleton. Much better than the Sprite, but still not mixing just right – given the smokey with the sugar cola.

I didn’t try a whiskey sour, but I have a feeling that after Sprite and Coke, this might not go too well either. I normally use Jim Beam for mixing with sour, which is less of an oak flavor and more of a sweet flavor, which is type of whiskey that sour mix goes better with.

This is a whisky meant to be served on the rocks. Or neat, if that is your preference. Stay away from adding mixers to this blend of canadian whiskey. I recommend it to have around for those that want something more than just the mainstream and more popular blends.