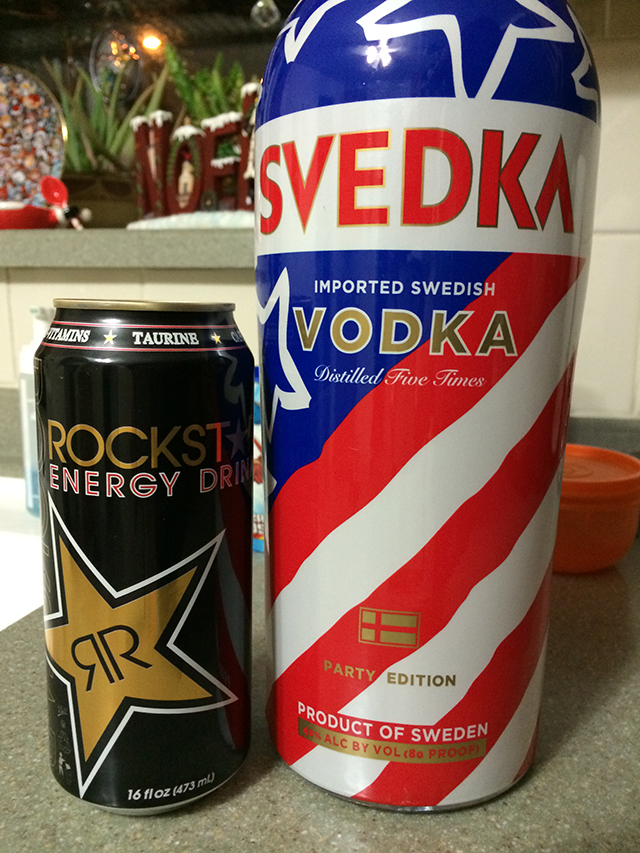 Just like a Red Bull and vodka, a Rockstar and vodka is a mixed drink that’s popular in a lot of clubs. And while having one or two in a night is mostly harmless, when consumed in large quantities, it can be an issue for many.

The concept and production of energy drinks has been around for many years, with Red Bull taking the top spot. But over the course of the last ten years, the number of different types of energy drinks based on large doses of caffeine and taurine that give you an increase of energy. Combine this with sweetener (sugar, high fructose corn syrup or artificial) and you have 8.4oz, 16oz or 24oz of some type of carbonated beverage that you can drink on it’s own or mixed with a spirit like vodka.

The mixing of the two items into an alcoholic beverage brings up many health or safety issues, most likely related to how many drinks are consumed in a short period of time. Health officials on both state and federal levels here in the United States have placed bans on some of these types of energy drinks. But that doesn’t stop people from mixing them on their own.

Regardless of the health issues of over consumption, I see nothing wrong with having one or two of these types of mixed drinks in a night. I try to limit myself to no more than two 10 oz. drinks every few weeks. Not so much that I’m concerned about the negative aspects of the drink, but more that I don’t need that much energy in that time frame.

For this round of drinks, my choice of vodka is SDVEDKA. Any mid-grade vodka works here. I would highly suggest no well vodka. You want something good. Top shelf would be a waste, in my opinion.

My preference of Rockstar is mostly due to the size of the can (16oz) and that it’s a lot cheaper than Red Bull. And the taste is very close to being that of Red Bull. Each can of Rockstar when mixed with vodka over a full glass of ice can make two larger drinks (using a larger rocks glass).

Energy wise, it works well. I only use the regular Rockstar (no sugar-free or diet) so the sugar high is part of the rush. The vodka provides the buzz. And the caffeine and taurine do the rest for the ultimate energy boost.

But word to the wise: be responsible when drinking Rockstar and vodkas. Just a few and you are ok. Pounding these all night for multiple nights in a row and you might find yourself being health concerned.