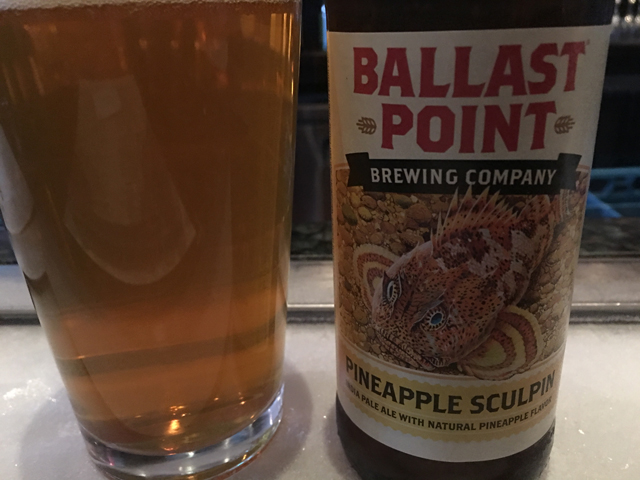 After finding out I like the Grapefruit Sculpin and giving it a nice review, I had to post my adoration for Ballast Point’s other fruit-infused IPA – Pineapple Sculpin, which is still not as widely available as it’s Grapefruit brother, but it recently found it’s way into a local Salt Lake City bar called Beerhive [which is where the above photo was taken]. I’ve not found it for purchase in any of the Utah State Liquor Stores yet, but did find it on my last road trip to Nevada.

Compared to the Grapefruit Sculpin, the taste has a similar citrus edge to it, but it’s different enough that I actually like it a little better. It’s still the same 7% ABV and the slight bitterness is a result of the infusion of the pineapple flavor. I’ve had a few of them so far and each bottle makes me wish these were sold locally outside the bar. Perhaps enough requests to our Utah State controlled liquor monopoly will add them alongside their Grapefruit counterpart.

If you’ve tried the Pineapple Sculpin, let me know how you liked it below in the comments.